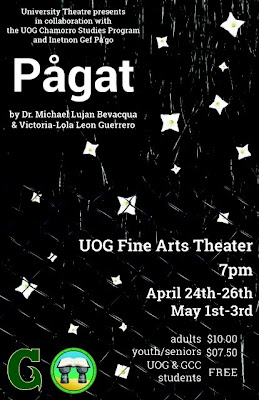 University Theater closes its 2013-2014 season with the play Pågat, written by local writers Dr. Michael Lujan Bevacqua and Victoria-Lola Leon Guerrero, directed by Michelle Blas, and featuring choreography by Vince Reyes of Inetnon Gef På’go. Pågat explores the complexities of cultural identity and change through the lives of four modern young adults and the memories of a cast of spirits, who share key moments in the history of the Chamoru people. The play is set in a latte site in the jungles of Pågat. The play also conveys the essence of the word Pågat, which means to advise or give counsel, as both the modern characters and the ancient spirits help each other work through personal struggles with identity, culture, and destiny.